After another English Premier League season came to a close, below is the Bet Central team of the season. This takes into account form and performances in the league only and not any displays in cup competitions.

This is a relatively strong position with three outstanding candidates. The first is the golden gloves winner, Ederson. City have the league’s best defensive record (32 goals conceded, 19 clean sheets). Two other ‘keepers have made bigger impacts though. Both Aston Villa and Chelsea had massive difficulties in goal last season as Dean Smith’s side used four different goalkeepers and Frank Lampard twice dropped Kepa Arrizabalaga. The impact made by Emi Martinez and Edouard Mendy was remarkable.

Villa went from surviving relegation on the final day to keeping 15 clean sheets and having the eighth best defensive record. However, Mendy made an even bigger impact at Chelsea. He kept 16 clean sheets in 31 matches as The Blues had the second best defensive record. He enjoyed shutouts against Spurs (twice), Man Utd (twice) and Liverpool. His ball-playing ability was surprisingly superb too:

There were a few candidates for this role including two excellent right backs defensively in Aaron Was-Bissaka and Vladimír Coufal. Both players are similar stylistically in that they are rock solid and are rarely beaten one versus one but they lack some creative flair in the other direction.

The man who gets the nod is Man City’s Portuguese fullback, Joao Cancelo. Whilst he played some matches at left back, he also played a large number of matches on the right despite the fierce competition of Kyle Walker. His role saw him play as an extra midfielder, inverting narrow and covering counter attacks. He also pushed higher up to be a force in attacking areas. For much of the season, people tried to figure out a name for the role he was playing. “False two” was mentioned but perhaps the best moniker is that of “Cancelo Culture”. The positions he took up were quite unique for a fullback and made City much harder to stop.

This was a 100% pick. Having had defensive issues at times in recent seasons since Vincent Kompany first began to drop off in form and then departed Man City, Ruben Dias solved all of those. More old-school in his approach and benefitting from City’s deeper defensive line and more reserved pressing, Dias was superb.

He played 30 of the first 31 league matches as he showed incredible durability whilst also switching between playing left centre back and right centre back depending on who his partner was. In total, he kept 16 clean sheets in 32 league starts and won the Football Writers’ Player of the Season award, the first defender to take the crown since 1989.

This was a much tougher selection. John Stones was perhaps the closest contender but he only started 22 of the 38 league matches. In the first eight matches, he only played once whilst his finish to the season wasn’t overly impressive – he started eight of the final 15 matches, was red carded against Aston Villa and conceded twice vs Leeds and three times vs Brighton.

Maguire, meanwhile, carried the United backline. Until a late-season ankle injury, he played every match. He made amongst the most interceptions of all centre backs in the league and was a big reason why Man Utd went unbeaten all season on the road. An indication of how much Man Utd missed him was seen in eight goals conceded in the final four league matches without him.

United did leak 11 goals in the first three league matches as Maguire was left exposed by a very open setup but once Ole Gunnar Solskjaer dropped the defensive line deeper and used two holding midfielders, he was a rock. Other notable mentions go to Wesley Fofana, Thiago Silva and Ezri Konsa.

Like Dias, this is a 100% pick and one not really disputable. Shaw was outstanding going forward as he registered five assists and he had the fifth most shot assists across the entire league behind four attacking midfielders.

After being criticised for his weight and focus by Jose Mourinho a couple of years ago, Shaw managed to start 30 of the first 36 matches before getting a couple of rests. Other honourable mentions in this position go to Ben Chilwell and Aaron Cresswell (with eight assists) but this selection is a shoe-in.

It was an amazing season for West Ham and a big part of that was captain and holding midfielder, Declan Rice. Whilst Tomas Soucek scoring plenty of goals, Rice was the glue who protected the defence with strong tackling and interception numbers but also a real ability to drive forward from deep with the ball.

If it wasn’t for an injury that ruled him out of six matches in April and May – where West Ham lost three times – David Moyes’ side would have been even closer to finishing in the top four. It is no surprise that Man City, Man Utd and Chelsea have been weighting up a big-money move to bring the 22-year-old on board.

Like Dias and Shaw, Bruno Fernandes was a certain pick after the season he has had at Manchester United. He finished the campaign with 18 goals and 12 assists even if 50% of his strikes came from the penalty spot. Fernandes had the highest total of shot assists in the league and was amongst the leaders for through balls.

In a side sometimes accused on lacking leaders and character, his personality and ability to take responsibility was also a major factor and it’s the reason he is second-in-command behind Harry Maguire.

The final central midfield spot is a difficult one with three outstanding candidates in Mason Mount, Kevin De Bruyne and Ilkay Gundogan. It’s a difficult choice because Mount was the only one of the three to play more than 60% of the available league minutes (84%). However, the impact of the City duo puts them ahead even with their relatively low game time.

De Bruyne had a superb run towards the end of 2020 but Gundogan got 13 league goals and stepped up particularly during an injury absence for his Belgian midfield partner. The German’s season petered out somewhat with just eight starts and two goals in the final 15 league matches but he had all-but taken City to the title mid-February.

Despite a curious season for Liverpool, which saw Sadio Mane and Roberto Firmino go on 14 and 18 match goal droughts in the league respectively, Mo Salah carried the team’s scoring for months on end. He finished with 22 goals at 140 minutes per strike. His longest run without scoring was six matches but his pace and durability (missing just one league match due to COVID-19 contracted at a family wedding) was remarkable.

It could be argued that his all-round performances weren’t as good as in previous seasons though and there were certainly wasteful matches as he missed 19 big chances over the season, the second most in the division. His impact was still ahead of others with high scoring numbers and a fine finish to the season to take Liverpool to a third-place finish.

With the most goals in the league and also the most assists, Harry Kane had an exceptional campaign. His 23 goals came at 134 minutes apiece and his 16 assists from 49 shot assists was a sublime return. That he created 13 chances from long distribution showed his range of passing and creativity.

This selection, like a handful of others is not disputable and his performance away at Southampton where he scored once and assisted four goals for Heung-min Son was possibly the best individual display of the campaign. 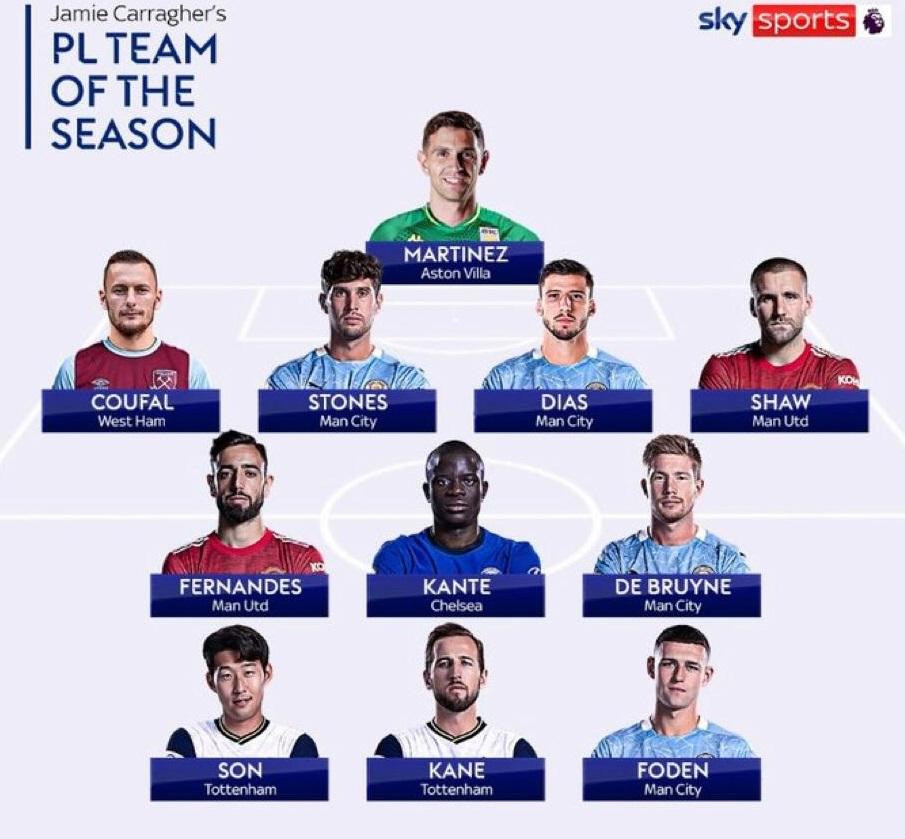 Up until mid-February, Aston Villa’s captain was one of the contenders for player of the season. With the fourth-most dribbles per game and the second-most shot assists, his ability to carry the ball in tight spaces and attract opponents was unmatched. No player in the league was fouled more often per appearance than Grealish either.

Whilst a shin injury from overuse kept him out for 12 matches and many have used that as a reason to exclude him from the running for TOTS, he still played 500 more minutes than alternatives like Phil Foden. Grealish’s six goals and 10 assists plus winning a couple of penalties came for a side who were nearly relegated a year ago.  Someone like Son produced incredible numbers (17 goals, 10 assists) but four of his strikers came in one match and he went on a run of one goal in 13 matches at one point as Spurs underachieved.

Grant de Smidt is a football writer based in South Africa. He writes for a number of sites and newspapers including bet.co.za. Follow @grantdesmidt on Twitter.